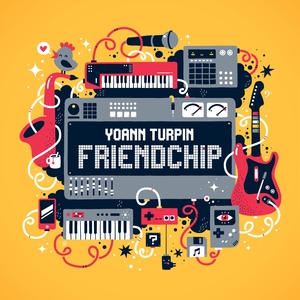 Jean Pascal Boffo - guitar on "Final Bit on the String"
Pierre Cocq-Amann - saxophone on "Bright Side of the Game"
Joe Cimatti - vocals and lyrics on "Swords and Spears"
Mathieu Demange - programming and production on "Beating the Bits", final mastering
Leonid Zarubin - artwork and design
All other credits to Yoann Turpin

Yoann Turpin is back!

About a year and a half passed since his previous Ubiktune album, the adventure-based Chip Ship, and almost two years since his debut effort Rhythm'n'Bits. Now, with FriendChip, Yoann decided to pay tribute to his friends and fellow musicians that he met since his first release on Ubiktune. He also invited some of them to take part on the album.