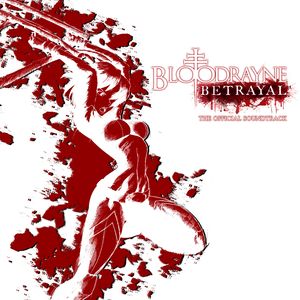 This is the official soundtrack album of BloodRayne: Betrayal, for Xbox 360 and PS3. It includes not only the complete, fully-produced original soundtrack, but also NES+VRC6 alternate soundtrack, unlockable with a special code, which is revealed in the end credits. Virt has also made available the source FamiTracker modules from the chip covers.

"During development, the programmers were using Nightwish tracks and Castlevania: Symphony of the Night tracks as temp music. So, I said to them, "I can do better than that.. just kidding, I can't actually, but I'll do my best!" and cried softly to myself. After 3 months of writing, shredding, recording and mixing, I had finished our soundtrack. The guys in New Jersey (the publishers) said "Whoa, this is the real music from the game?" and we said "Yeah." and they said "YEAHHH!!" and did jump-kicks.

Then, I came up with the completely idiotic idea to include an unlockable NES soundtrack, to replace the regular one. The director, Sean Velasco, yelled "DO IT!!" before I was even finished pitching the idea. The programmers said "that would kick ass!" and promptly forgot about it until the end of the project, whereupon they said "Sorry, no time left!" (there actually was no time left, they were already living at the office 24/7 and surviving on a diet of Moon Pies).

So I begged and pleaded and used my Jewish guilt powers; eventually the lead programmer said "Oh, all right" like that time Dad finally let you get a Cowboys-and-Indians BB gun. They wrote the functionality to enable "8 Fingers, 8 Bits" mode, as I frantically tried to learn FamiTracker and cover each song note-for-note. I imagine most working composers would just have run MIDI files through a "chiptune-o-matic" converter like GXSCC, rather than creating machine-code-compatible, authentic VRC6 versions. But most working composers probably don't have a death wish, and actually value their time.

This album is dedicated to Pablo Bert, a.k.a. DJ Mike Haggar -- a truly amazing human being who, among other heroic feats, helped my wife avoid failing Calculus last semester. He was also in the Guinness Book of Records for his world-record Battletoads speedrun.

The NES portion (available in FTM source format for your amusement) is further dedicated to jsr, the creator of FamiTracker, who has worked very hard to make one the finest chiptune hobbyist tools in history." — Jake Kaufman.