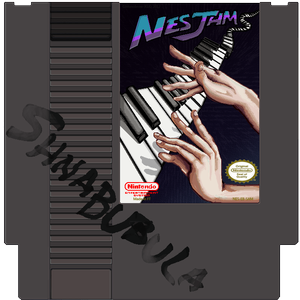 When he defeated his game genie in battle, Tommy was rewarded with an item of immeasurable value. Where the genie had been only a moment before, there now sat a new cartridge for his nintendo entertainment system, his parents helped him hook it up. He took this enchanted cartridge and put it into his system. A single message flashed on his screen. PREPARE TO JAM. Not sure what to do, tommy went to his older brother's keyboard and placed his fingers on the keys.....they suddenly started to move and they began playing the themes from his favorite games. And then the magic happened, his nintendo, powered by his new mystical cartridge, started to play along with him. Tommy turned on his tape recorder and the two of them, boy and console, jammed for 40 minutes straight. 20 years later, this recording, now digitally remastered, is available to the public for the first time.