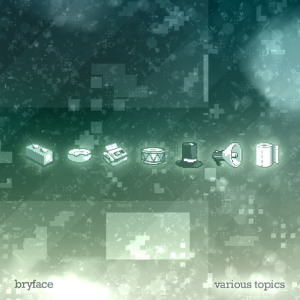 This album of Game Boy tunes aims for a uniquely illustrative approach to chipmusic, resulting in a sound that is lush, nuanced and full of vitality.

"Various Topics" consists of several all-new tracks from bryface, as well as remastered and/or expanded versions of selected previously-released songs.

Each song varies wildly in style and theme, but expect a few elements to be shared in common: chunky, intricate grooves. Meticulous sound design. Lyrical melodies that evoke a decidedly old-school demostyle flair. Stunning washboard abs. But more importantly, this album hopes to take you beyond the technical details into less tangible emotional territory — into the peculiar, the saccharine, the oddball, and just maybe, the surprisingly profound.

Talk and read more about the making of Various Topics here: bryfacetunes.tumblr.com